Overview of Building techniques with Earth

Here's an updated overview of various earthen techniques, originally written wrote 5 years ago for publication in a Czech Friends of the Earth magazine. It may not be complete, as new techniques always gets developed, old techniques rediscovered and hybrids evolve: See the film below to learn even more.
Rammed Earth:

A century old technique of compressing slightly moist earth within forms (Shuttering). This allows large wall segments to be build in place at the same time. It’s again being taught in the DK school of architecture and is favored in several ecovillages Traditionally in Hungary (and perhaps in Czech?) it’s been done by travelling Roma craft people.
It's possible to ram manually, but presently pneumatic tampers and expensive shuttering systems are used, along with earth moving machines, which makes it more efficient, however also more costly. Rammed earth has excellent thermal mass properties, and thereby offers very low insulation value. In S. Spain there still exists castles close to 1000 years old made by this technique ...-With only flat roof and no cement/plastic/tiles!
LeichtLehm/Light Loam 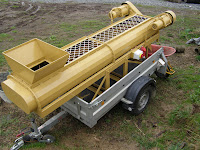 A mixture of straw (or woodchips) mixed in a watery clay mix poured into forms much as with rammed earth, however without compressing. When the water evaporates, the mix gets much lighter. The organic matter provides an insulation value, and the clay protects it from rotting, as it dries out any moisture. It is easier to work with than rammed earth, as it doesn't need to be compacted, however the shuttering is still a prohibitive element for many home builders, as it makes shaping more difficult. Recently a great machine has been developed in Czech Republic "E-Mixer", which is ideal for mixing earth with fibrous material. It can mix anything from light loam, cob to various earthen mixes, though I still prefer my vertical shaft plaster mixer for simply mixing sand and earth. Technical details of the machine can be seen here, and I'd be happy to facilitate a contact to the producer. 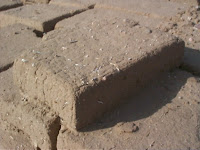 Adobe: unburned earth bricks
The traditional earth brick, widely used in Hana, (the region where I live in Czech Republic); This article is written in such an earthbrick house! You simply shovel/pour an earth mixture into molds and leave them to dry in the sun. The technique is gaining new popularity in the S.W. USA, however often the modern adobe's are stabilized with asphalt. Good adobe requires a special soil, and gets quite heavy to work with. The houses have high thermal mass and very little insulation quality.
Compressed Earthern Blocks: CEB 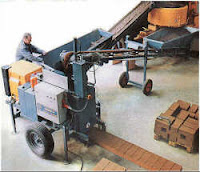 Another way of producing a mudbrick, especially suited for regions without the baking sun, and the special adobe soil. A mix of earth (clay and sand) gets put into a mold and compressed. That's it! It can be done manually or through various industrialized methods, the best machines currently on the market seem to be made by Oskam which is the machines used by the Czech company Claygar. The setup enables builders to make the CEB's of local available soil. The advantage to this method in comparison to commercial bricks is that it is unbaked, and thereby low in embodied energy and better at adjusting the moisture balance in the house, as well as having excellent thermal qualities. The bricks are also more firm, keeping a better edge than an adobe.
Cob: 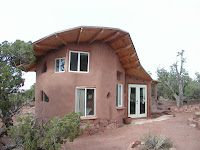 Another very old technique, recently revived by the Oregon Cob Cottage Company. Cob is an old English term meaning a 'lump or a rounded mass' and is basically a mix of mud and straw. The Oregon Cob is preferably mixed by dancing feet and excellent to build rounded artistic structures, as well as combining with various other materials. It has been named “The Duct-tape of Natural Building!”.  It has good thermal qualities, some insulation value, is very versatile and dirt cheap, but very laborsome!  The traditional style of construction envolved some horses trotting around mixing the cob; the mix got passed onto the walls, hammered on with spades, and later the walls got trimmed straight with sharp spades. I’ve been asked to find old houses in Czech built with this technique, and I’d appreciate if any of you readers could let me know in you know of any. Here's a picture of a finished house built by Sasha in USA, however 20 year old Martin, along with his friends build a small cottage  here in C.R. during the summer of 2010, after his internship here at PermaLot centre of Natural Building. More photos on this online photo album ...and this.
Wattle and Daub: 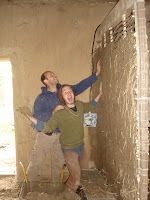 A technique often seen in Africa or as infill in old European framed houses; I have seen the technique used in Poland and I’m pretty sure it was widely used in Czech too. The 'Wattle' refers to a woven mesh of available branches, which gets covered by 'daub', a muddy mixture of mud and straw, which gets thrown onto the mesh. I use it in our house, as it's an excellent way to build thin dividing interior walls, and with basic plastering skills looks like a 'normal' wall. A very easy and inexpensive wall that will last for centuries. Again; doesn't insulate well, but for interior walls it's more important to accumulate heat, regulate moisture and eliminate sound and smells; all functions served by a 10 cm earthen wattle and daub wall. Photo shows a couple of our interns during their first days here, making a wall for our bathroom.
Cordwood:
This is a hybrid technique, using the best of both wood (volume, ease of access and some insulation) and Earth (matrix and thermal mass)  The technique utilizing thin trees which usually is used for firewood. The trees are cut into short lengths equal to the thickness of the wall, and then placed in a matrix of normal earth mortar. The cavity between the exterior and interior mortar is filled with sawdust. 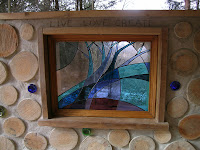 It's a good and inexpensive way to build; it was used in Siberia and N. Greece some 1000 years ago and Komenskeho made a painting of such a wall from a house in Czechoslovakia. Recent development is largely due to Rob Roy's promotion of this technique in several books, buildings and workshops at his Earthwood Building School.
It's been pointed out that problems can occur due to the natural tendency of wood to swell and shrink, as well as it's abilities to transport moisture. Much of this could be solved by plastering the house on the whole exterior. A final wattle and daub wall should represent 50% insulation and 50% thermal mass, with very limited serious cold bridges, as the wood typically is 40 cm wide. Likely the latest use of this technique in C.R. was by a Brontosaurus youth group in Jeseniky, summer of 2010.


All of the above techniques can be experienced at the PermaLot Centre of Natural Building, which offers numerous possibilities to learn the secrets of natural building throughout the year under the overall slogan:

"Natural Builders Do It Mud!"

To learn more about building with Earth, I warmly recommend to watch the movie 'First Earth', available on youtube in 12 parts (with various subtitles), or buy it here as a DVD 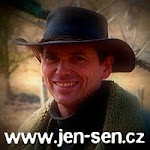 Natural Building Consultancy, Design, Building, Workshops or Permaculture Design of Events or Landscapes? Everything is possible...

Sign up for my quarterly Newsletter; It will include list of events, special offers and summaries of past events, including detailed 'do-it-yourself' photo-comics.